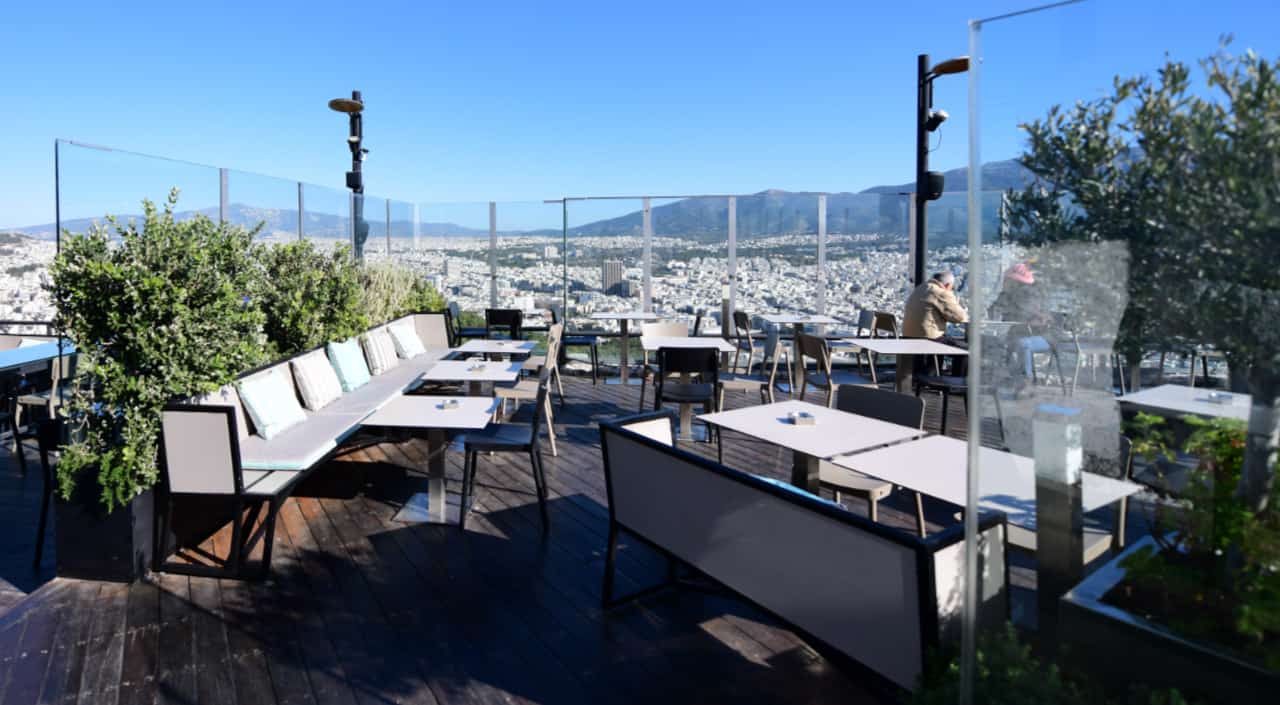 – With an altitude of 277 meters, it is the highest spot in Athens.

– About its name (which till 1832 was not Lycabettus, but Aghesmos) there are various versions: One speaks of wolves that were wandering in the area, another one traces its etymology back at the words “Liki” (faint light)  and “vaino” (walk, go), because the sun emerged from there, like saying the twilight hill. There is, also, a third version, that wants the name to be pre hellenic and to mean mastoid elevation.

-According to mythology, the hill was shaped by a rock which Athena was carrying from Pentelis, on her way to Acropolis, aiming to make a small intervention in her temple, and raise its height a little. On the road she heard the news about Kekrop’s daughters, that they had opened the basket, which she had trusted to them to guard it, and in which there was Erichthonius. The Goddess got upset, the rock fell off her hands, and became what we Athenians would later call the hill of Lycabettus.

– The pinewoods of Lycabettus haven’t always been there. Since the deliberation and onwards, the hill was naked, with many quarries on its slopes to nibble its ground. After many consecutive forbiddances of their operation and obviations of forbiddances, Lycabettus was afforested for the first time in 1880. Those first little trees became a wonderful food for the goats that where pasturing at the sides of the hill, at the so called Katsikadika (goat’s place) around the Tank. Somehow like that, the efforts of reforestation were continued until 1915, so the goats became less and the trees were saved.

-Lycabettus was illuminated for the first time in 1835, with one hundred lanterns that were shaping a big Omicron (O), the initial letter of the name Othon. The illumination of the hill took place on March 25, 1838, via burning twigs shaping a flaming cross.

-Ernest Chiller had big plans for Lycabettus: At the endings of 19th century, he deposited to Charilaus Trikoupis a majestic plan concerning the «Aerion Therapeftirion» (the “Aerion Infirmary”), that would  transform the hill into a center of recreation, and would include among others a hotel, coffee shops, a reading room , artificial waterfalls, fountains and playgrounds. Obviously, this plan was never materialised, because it was considered too expensive.

– The emplacements of Lykabettus, those that shoot the celebratory shots in New Year’s Eve and on national anniversaries were settled here in 1929.  Nearby the Faros tis Irinis (Lighthouse of Peace) was constructed in the early 30s, which enraged the Minister of Athens Spyros Merkouris because of the extra high consumption of electrical current. The German occupation armed forces destroyed the Lighthouse in 1941, but the financial problems of the city did not really improve.

– The chapels of Lycabettus are two: The renowned, bright white Saint George of the 18th century at the top, and the smaller and less known temple of Agion Isidoron (Saints Isidores) on the west side. From the sanctum of the small temple begins a cave which ends up at the Tourkovounia, feeding the urban legends about underground galleries in Athens and providing a safe passage in times of war.

– Between the temple of Agion Isidoron (Saints Isidores) and the old refreshment room of Lycabettus, which is no longer operating, was constructed the refuge of Lycabettus in 1939, at a depth of 100 meters, for the safekeeping of the State documents and the protection of significant persons in case of danger.

– The theatre of Lycabettus was constructed in 1965, covering one of the hill’s quarries.

– The cable cars that transport us comfortably and quickly at the price of 7€ round trip at the top of the hill, operated for the first time in 1965, amid protests by many Athenian architectures. Among them there was Cyprianus Mpiris, who considered the intervention on the hill a «barbarity».

– The old refreshment room of Lycabettus among the pinewoods may not be operating any more, but at the top of the hill, just right under the chapel of Agios Georgios (Saint George), there are many options for food and coffee. First of all, the Orizontes (Horizons), for the astonishing view and the absolute economical set menu τ. A small balcony under the Orizontes, the Sky Bar, makes our coffees (at 4€ the espresso freddo) while having Athens at our feet and it suggests the menu of the day at 12€. It also makes wrapped souvlaki and pita with falafel to take away (at 2-3€). Finally, the food booth outside the theatre of Lycabettus bakes delicious hot dog (1,20€ the small one, 2,50€ the big one),which we accompany with frozen beers or pure drinks in moonlit nights. 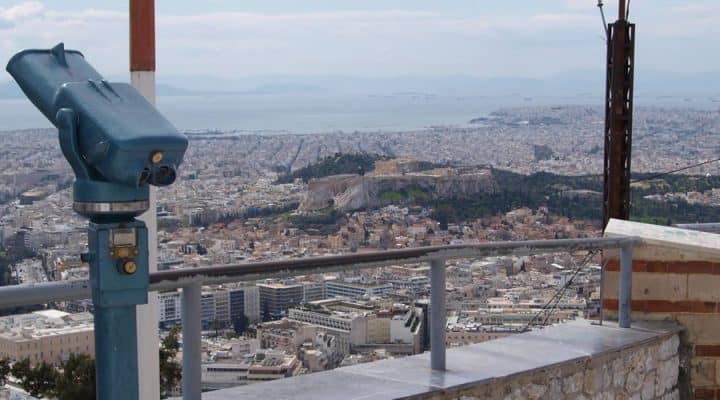 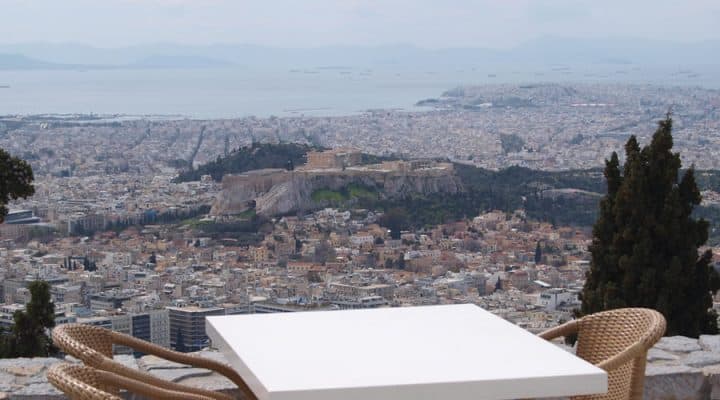 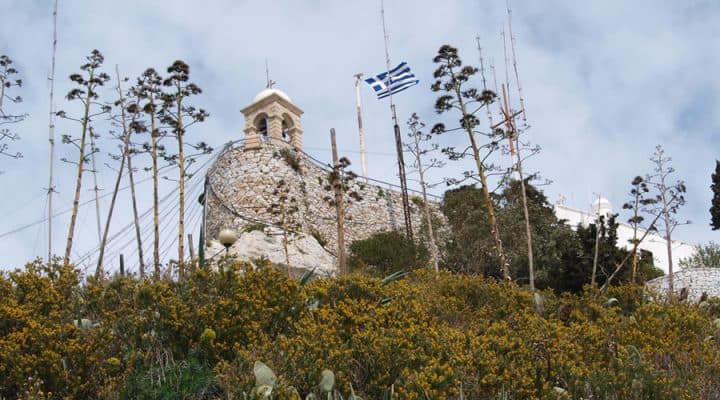 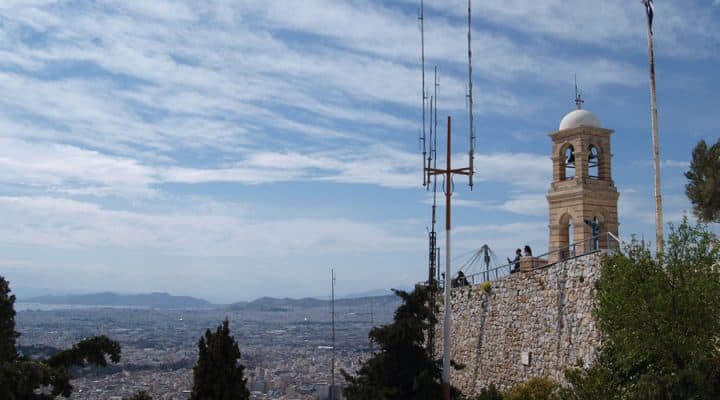 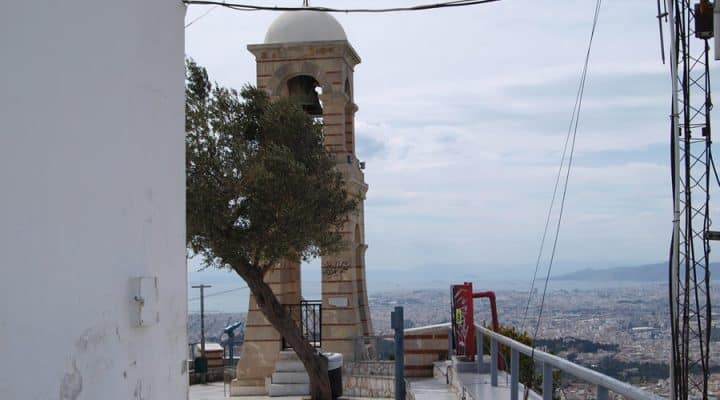 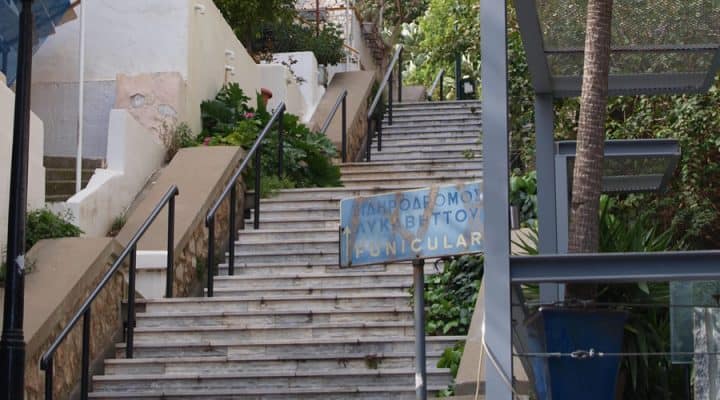 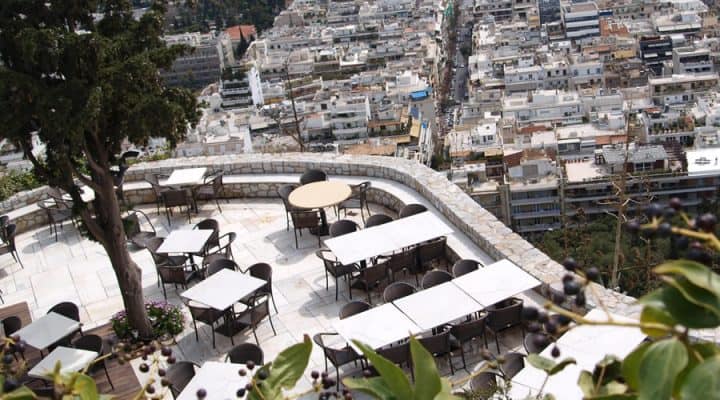 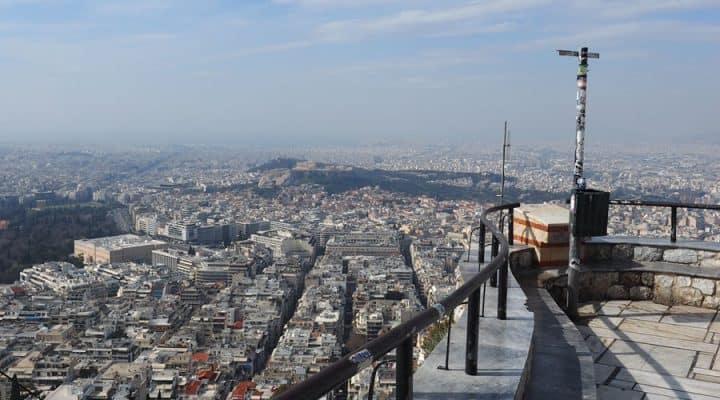 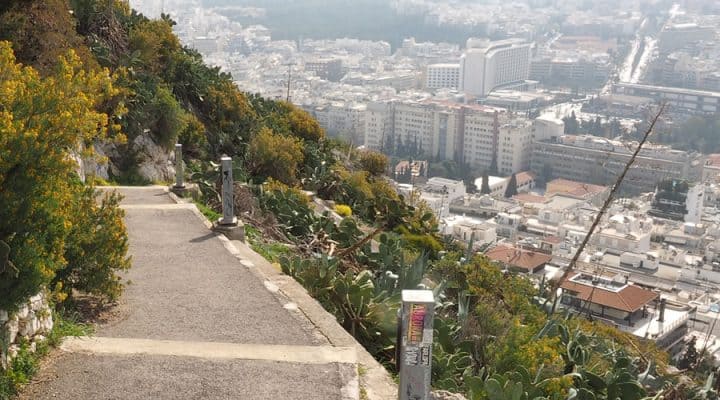 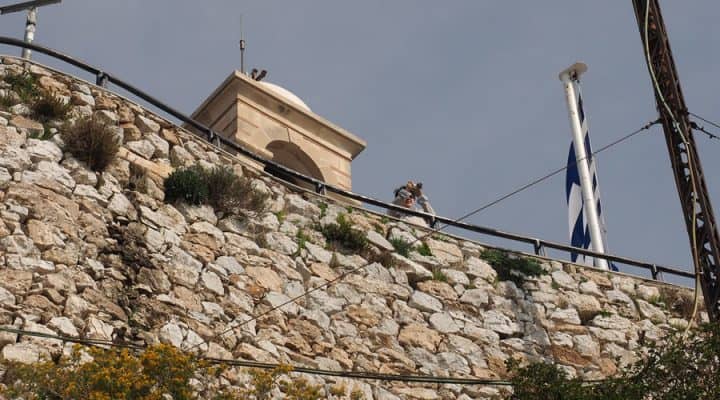 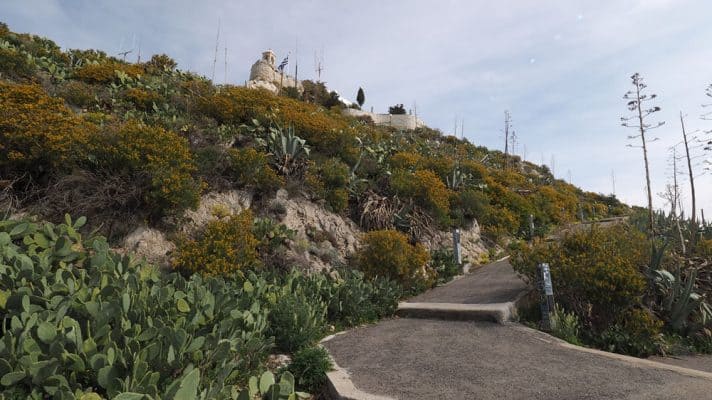